The last 2 weeks have been unbelievable.  Getting back into the routine of going back to school is always a bit challenging, but throw a baby into the mix and it's downright silly!  I really don't know if I can sit here and actually recall everything that has happened.  Let's just say that every time the phone rings we hold our breath and say a prayer. 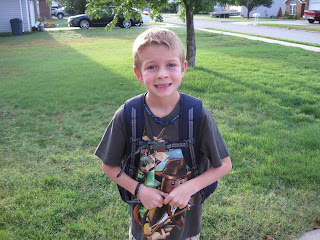 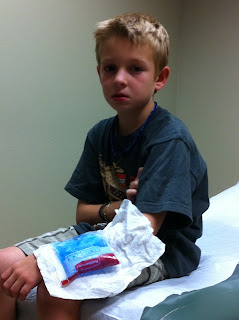 I had just stopped and picked up dinner at Wal-Mart (a rotisserie chicken, frozen veggies and Steam and Mash mashed potatoes).  The cashier even made a crack about my purchases being an easy dinner.  I was driving to the after school program to pick up Henry, literally down the street when the director called and told me "Henry has fallen off the monkey bars."  And I knew.  I knew the evening of an "easy dinner" and stories about our first day was out the window.  When I got there I could tell he was in a lot of pain.  Bless his heart.  I called his pediatrician and they told me they don't do x-rays after 5:00 (it was just after) and said we should got to the ER.  Yeah right.  Not if I can help it!  I wasn't about to make my baby wait for hours and hours!  We picked up the baby from daycare and headed to the Mediserv Clinic on Wedington.  I cannot say enough good things about this place.  They have been there for us so many times on the weekends and after hours.  Thankfully, they do x-rays, too!  He had fractured his arm and would need to get a cast.  Through it all he was very brave.
The nurse said we would be going to see the orthopedist the next morning and they put a temporary brace on his arm.  I called a sub for the next day (2nd day of school, no doubt) and planned to take him with Scottie to get his cast.  But they didn't set the appointment until the FOLLOWING day, which meant I would also miss the 3rd day of school.  Not a great way to start off the year for H or me!  But family always comes first.  Always.  The baby had a check-up scheduled that Scottie was going to take him to, but I ended up being able to do it.  He had a runny nose so we had that checked out, but were told it was viral and he would be fine.
H got his super awesome blue cast on Wednesday and couldn't wait to get back to school.  Scottie and I took the opportunity for a lunch out together after he was back at school and I had plans for a nap.  As I laid down in my bed the phone rang.  It was daycare.  The baby had a fever and needed to be picked up within the hour.  What?!  So off I went.  Which also meant he couldn't return the following day because he has to be fever free for 24 hours before returning.  Oh my.  I had to get back to school!  I hadn't even seen my 6th graders yet and it was nearly the 4th day of school!  Crazy.  In steps Grama and saves the day!  She agreed to keep him at her house and poor on the TLC Thursday and Friday so I could return to work.  What a lifesaver!  The week seemed to end alright after all.  I was thinking this week had to be better that last week!  Monday seemed to start out well enough even though the baby had been kind of restless the night before.  Then the phone rang at school.  It was daycare again and the fever had returned.  Really?!  Scottie went to pick him up and I made a doctor's appointment.  Turns out he now has a sinus infection and the beginnings of an ear infection.  Here we go again.  Our friend, Kelly, graciously agreed to keep him for us at her house.  Yet another lifesaver!!  She even made us dinner!!
I am really hoping we are on our way up.  After all that has happened, it is hard to say for sure.  But I am definitely being optimistic!﻿
Posted by Allyce Ann Johnson at 6:22 PM

You're in the battlefield and Satan is trying his hardest to wear you down--but I'm praying faithfully for you and your family that God would sheild and protect you all and your mission field.

Good grief Alyce! What a week you all have had. It can only get better:)