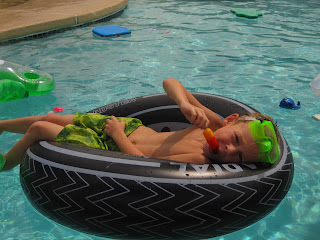 I realized yesterday marked my last 3 weeks of summer. While I am a little saddened by this realization, I love my job and am really starting to get excited about the upcoming year. 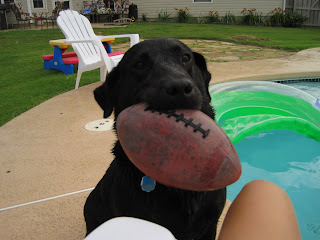 We are so blessed to have a pool in our backyard and enjoy it so much during the summer months. Our lab, Maggie, thinks it's her pool and we just get to swim in it! She loves to swim with us and dive underwater to get torpedos. She is so funny to watch!! 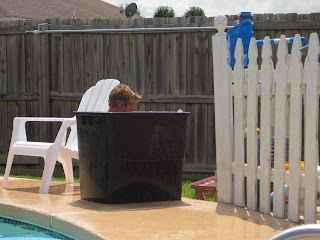 The water was a bit chilly this day so Henry played in his toy bucket. He called it his "hot tub." 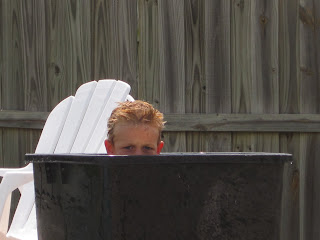 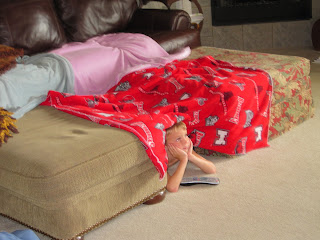 Of course, this summer has been quite rainy so there has been some fort-building, wii-playing and movie-watching, too. There have been a few trips to the mall, the library and Grama and Papa's house.

Henry starts 2nd grade in a few short weeks. It is so hard to believe he is growing up so fast! I treasure our time together every summer. Every day is an adventure! 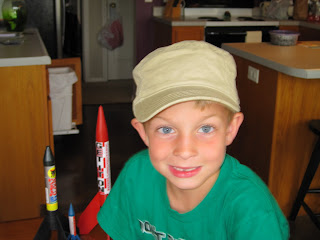 It's been a wonderful summer!!
Posted by Allyce Ann Johnson at 9:33 AM 2 comments:

Not What I Planned Today 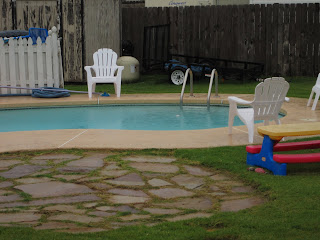 This is not the sight I was expecting today...rain. I expected to be swimming with Henry today, watching Maggie and him splash around and play. I did not expect rain. Although it is great for our lawn, it deflated our fun. However, Henry and I did set out on an adventure this morning before the rain set in (I tried to call it a "date" but he corrected me and called it an "adventure" instead). We stopped by the coffee shop and the donut shop before heading to the Fayetteville Farmer's Market. It was a beautiful morning and there was lots of produce! We bought some blueberries, cherry tomatoes, candy onions and cucumbers. We both really enjoy going there on Saturdays. We drove by the library and planned to pop in, but they were closed today, so it was on to Wal-Mart!! It was a pretty good trip - at 9:30 am. Maybe I'm on to something...go early before the rest of Fayetteville gets there! We made it home by 10:45 am. 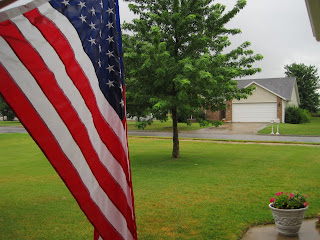 Here's a view from the front. I bought a new flag this week and am feeling very patriotic! 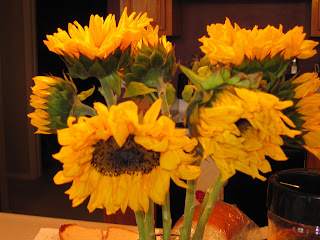 I was afraid to buy flowers at the Farmer's Market since they would be sitting in the car a while, so I got some beautiful sunflowers at Wal-Mart. Henry suggested we "plant them in the yard."

I have thought about updating my blog a bunch over the last month, but quite honestly didn't know what to say! I think I was putting too much thought into it. HA

We have lots of fun things planned over the next couple of days...Freedom Fest tonight (assuming it's not rained out), cookout tomorrow and swim (again assuming it's not rained out), and launching an arsenal of fireworks currently taking up most of my kitchen table and something Henry has been looking forward to all week! I will do my best to get pics up soon. Happy 4th everyone!!
Posted by Allyce Ann Johnson at 1:27 PM 1 comment: