3 years ago today, I heard the words no one ever wants to hear.

In January 2007, Scottie and I decided we were ready to have another child so I went to my OB/GYN for a check-up to make sure we were good to go. During the routine exam, he noticed an enlarged lymph node above my right collar bone. He thought it could be enlarged from an infection and put me on high-powered antibiotics. He told me to return in 2 weeks and we would go from there depending on whether or not the size of the node changed. The very same day, I saw my regular doctor because I had developed seriously itchy skin and would break out in hives at night on my arms and legs. My OB/GYN said I should mention the lymph node to him, which I did, but he didn't think the two were related. We would find out in a few short weeks they were.

After 2 weeks on the antibiotics, there was no change in the lymph node. My OB/GYN was alarmed. He sent me from his office to meet with a surgeon to plan the biopsy. The surgeon and his nurse both assured me "99% of the time, it's nothing" over and over...until the biopsy was performed. My surgeon told my mom and husband "we will have to wait for the results, but I think it's just the tip of the iceberg." Not good news.

My biopsy was on a Friday and I had to wait for the results.
Saturday.
Sunday.
Monday.
Finally, I heard back from my surgeon on Tuesday, February 13th.
It was 4:00 in the afternoon and I had just come home from school with Henry.
I remember I was standing in my bedroom when he called.
I remember exactly what I was wearing. I haven't worn that outfit in 3 years.
He told me he wished he had better news and that he didn't want to have to tell me over the phone. He said, "you have lymphoma." I didn't even know what that was, but I knew it was cancer. I dropped to my knees. Literally. I began crying, scared to death that I was facing death. He told me my prognosis was good and that this was "the good kind of cancer." I hate to think of there being a "good" cancer, but at that moment, those words provided comfort. He told me I would be meeting with an oncologist and would go through chemotherapy. He told me I would lose my hair.

Henry was sitting happily in front of the TV with a roll of Lifesavers during this whole time. He knew nothing of what I had just learned. God was definitely keeping his attention occupied while I was hearing the worst news of my life. I am so thankful for that.

When we hung up, I had some calls to make. I called Scottie first. I called my mom and then I called Leah. I remember Janet Jenkins coming over with Laura to take Henry to their house for a while and she brought with her a medical textbook so we could look up information about lymphoma. We didn't have a computer at the house yet so that information was all we had. My parents came. Evan and Leah brought pizza so I didn't have to think about what to fix for dinner. We all cried and laughed and were together. In that one evening, Evan and Leah and the Jenkins became family to me. They were the first ones on the scene (with my family) to comfort, to help, to just be with me. That speaks more to me about love than anything I can think of. When you face a prognosis like cancer, words are meaningless. They don't help because people don't know what to do with a cancer diagnosis. They don't really know what to say. It is so scary. But I didn't want words. I just wanted my family and my close friends with me. To just be.

That was the beginning of a very difficult road for me. One which I still travel everyday and one which I will continue to travel each and every day. I began chemotherapy for Hodgkin's Lymphoma on March 8, 2007. That day, before my first treatment, a central line was inserted on the right side below my collarbone where I would receive chemo and where they would take blood each visit. This line protected my veins from painful chemotherapy drugs. I couldn't get it wet and was at risk of infection around the site, so I was very careful about keeping dry and clean. Glad Press and Seal is the best stuff in the world - perfect for keeping it dry during my showers. I received chemo every other Thursday for 6 months. 12 treatments total. The standard treatment for Hodgkin's is a combination of drugs Doxorubicin (Adriamycin), Bleomycin, Vinblastine and Dacarbazine. 2 were given in a drip, 2 were pushed. Adriamycin was the worst. It was a bright red color and I would have to chew on ice chips to keep ulcers from forming inside my mouth from it. It was hardcore. I could taste that one, too, as it was going in. Not a good taste. But it has been referred to by other chemo patients as "the blood of the lamb" and "the scarlet savior" so I guess I shouldn't complain about it.

My 6th months of chemo were the hardest of my life. I have no idea how I managed during those months. I would take off from school on the Thursday of my treatment and be right back at school the following day teaching. My principal put a couch in my office at school for me to use when I needed to rest. I took a few naps on that couch! I team-taught with another teacher at my school. She frequently took my classes so I could rest on that couch. My church family stepped in and provided meals and house cleaning for us during my treatment weeks. They blessed us so much. They can never know just how much. The women of the church gave me a Hat Party where I received some beautiful hats and scarves. The church also did a fundraiser to help with expenses. The teachers at my school turned one faculty meeting into a fashion show where they modeled and then gave me even more hats - complete with a slide show of bald women! It was hysterical. I laughed so hard I cried. I was definitely ministered to during that time beyond what I can express to you.

Which brings me to the best part. For a long time, I questioned 'why me?' as anyone would during any trial. But during that time I cannot put into words the blessings I received, the comfort, the peace and joy that God poured out on me. He kept me going. On my own, I don't know that I could have made it. He kept me strong and gave me grace sufficient for each day. I remember the day that, while praying, I was able to thank God for my cancer. Because without it, I would not have known those blessings and that comfort, peace or joy. I cried because it was hard to say, but I do thank God for bringing me down this path. I know him better as a result and I know that I am stronger for having gone through what I have gone through.

Today I still struggle with several side effects from my chemo. Joint pain has been very intense this winter and a daily reminder of 3 years ago. Fatigue is still an issue. And my skin is splotchy in places from the chemo. Those are very minor compared to being alive today. I will gladly take them each day as a reminder to live each day to the fullest.

I don't know what the future holds. I don't know if Scottie and I will be able to have any more children because infertility is a possible side effect from the chemo. I had a miscarriage later the same year. Another heartbreaking trial. But I am 2 1/2 years cancer free. I will take that. I do know that I see things differently now. I am reminded every day that each day is a gift. Nothing is to be taken for granted because we are all one phone call away from news that rocks us to the core. I know that God is in control and I am not. I can rest in Him and trust because He holds my future. I discovered who my true friends were and my church family became my family. People rallied around me some of whom I didn't even know. People all over the state prayed for me.

3 years ago was (what I now refer to as) a "growing year." I am glad to be on the other side of it, but thankful today that it happened.
Posted by Allyce Ann Johnson at 7:31 PM 10 comments: 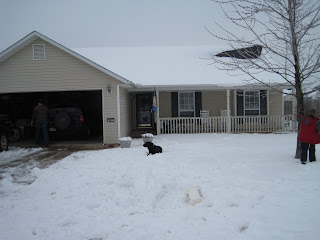 All day last Thursday we anticipated what the forecasters were calling the 'sequel' to last year's terrible ice storm. We braced ourselves and prepared for the worst. Luckily it wasn't as bad as last year's storm, but we did get some ice and a whole lot of snow!! School was cancelled for 2 days and church was cancelled on Sunday. I am not looking forward to making up 7 snow days (and counting - it's just now February), but I have enjoyed not having to get out in the cold. We have had some great fun together as a family and eaten lots of junk!!

Saturday we ventured out to Slim's for lunch and Henry and Scottie built a snowman when we got home. 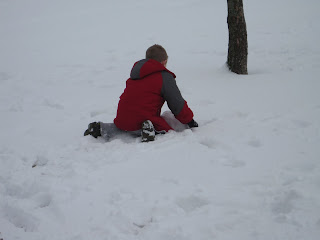 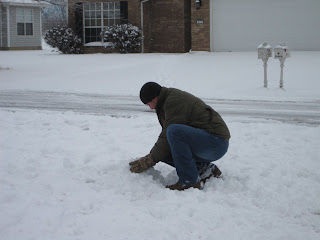 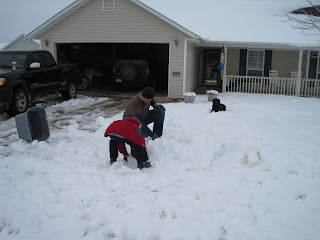 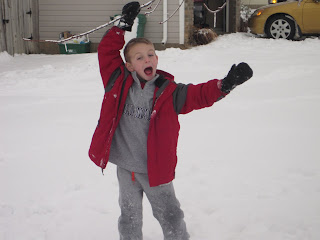 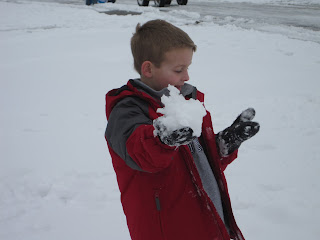 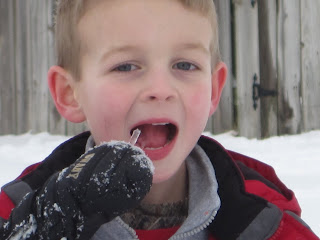 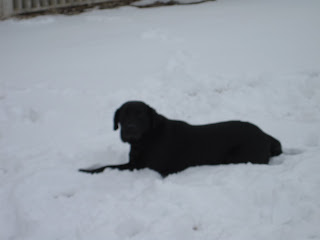 Maggie wasn't too sure about it all. She kept getting in her kennel in the garage.
I think she got cold! 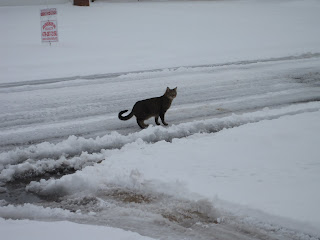 Rolley was heading down the street... 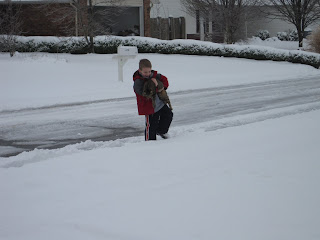 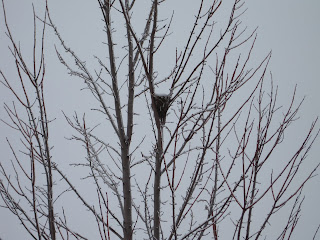 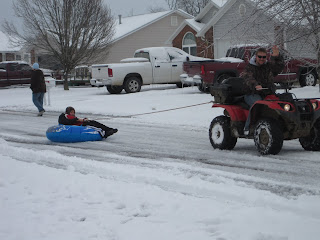 Our neighbors had the best idea!! 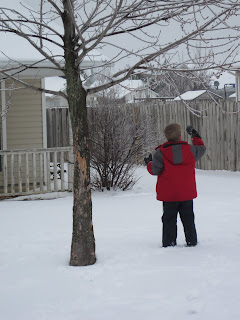 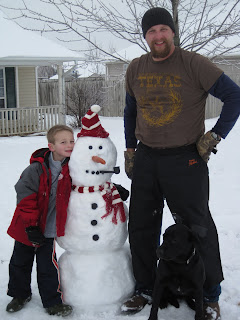